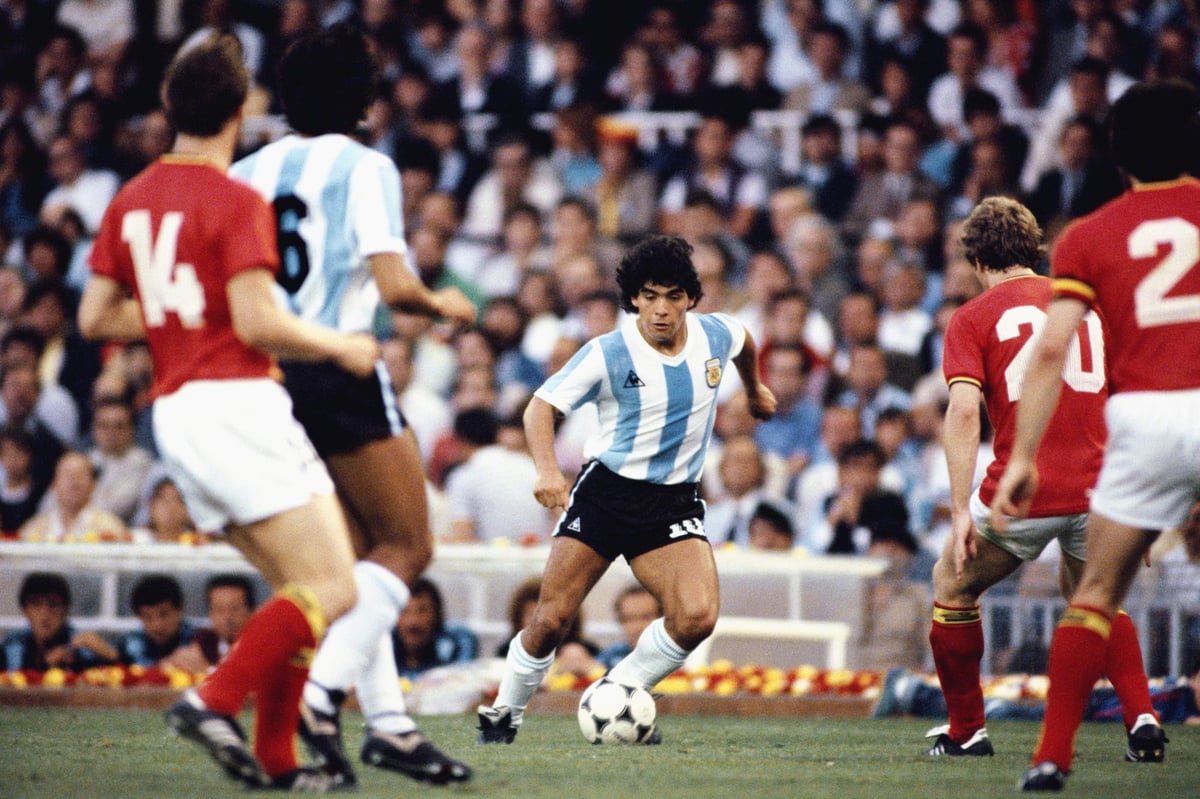 Argentina player Diego Maradona (c) takes on the Belguim defence during the 1982 FIFA World Cup match between Argentina and Belguim at the Nou Camp stadium on June 13, 1982 in Barcelona, Spain.

There had, after all, been a few scares relating to his old friend and strike partner, whose failing health had long been a source of concern.

Sofia, Caniggia’s wife, delivered the news after taking a call from her father. It quickly became apparent that it was no hoax. It was headline news in Mexico, where Maradona enjoyed perhaps his greatest hour when leading Argentina to World Cup glory in 1986, just as it was headline news everywhere else in the world. “Dieu est mort,” declared L’Equipe in France on 26 November, 2020. God is dead.

Argentinian ace Diego Maradona (L) flanked by (L to R) former Argentina’s president Carlos Menem and footballers Claudio Caniggia and Hector Enrique, smiles from the balcony of Casa Rosada in Buenos Aires after their return from the 1990 World Cup on July 9, 1990.

It remains hard to process. All the memories, goals and controversies. And the photographs. Among the most well known was taken 40 years ago tomorrow, when Maradona made his World Cup debut against Belgium at the Nou Camp in Spain as a 21-year-old superstar. He had just joined Barcelona in a £5million deal from Boca Juniors. It was his first competitive game at his new club’s ground.

The photograph, taken by Steve Powell on assignment for Sports Illustrated, shows the No 10 caressing the ball with that left foot as a death squad of Belgians – there are six in the picture, more than half the team – fathom how to deal with him. The shot has since become famous for exploding the myth that the camera never lies. It was not, as it seemed, a multiple man-marking job.

A wall was merely breaking up after a free-kick and Maradona was not, on this occasion, about to take all the players on. In fact, he was trying to give the ball back to Osvaldo Ardiles, who had taken the kick.

His pass was intercepted but the impression of Maradona v everybody else, like in a playground, is a vivid one. He was already an icon of Argentina football. His preciousness was the promise he had already made to the world. He kept his side of the bargain and more. According to Caniggia, the world failed in its duty to protect his friend – or at least the coterie of advisors and medics surrounding him in his later years failed dismally to uphold this covenant.

Claudio Caniggia meets Alan Pattullo in Malmaison in Dunfermline back in late May.

We are speaking in a hotel in Dundee, where Caniggia, now 55, is still revered by one half of the city following a surreal spell at Dens Park in the early 2000s. Conversation has turned to bereavement. About friends who are gone. About sudden, grievous loss.

Caniggia, who was based in the south of Spain after his distinguished career finally ended with a strange, beer promotion-associated spell at Wembley FC, has also now returned to live in his homeland. The great friends endured a slight hiccup in their relationship when Caniggia, who was at the time otherwise engaged at Rangers, was unable to attend Maradona’s testimonial against a World XI in Buenos Aires in 2001.

Caniggia sent Maradona a peace offering – the shirt he wore in a friendly against Wales after his remarkable return to the Argentina team prior to the 2002 World Cup. They were enjoying being reunited in Argentina before Covid hit.

“I was going to the training ground once in a while at the team he was coaching – Gimnasia,” explains Caniggia. “I would see the games, go into the dressing room, speak to him ten minutes before the game and then watch the game. I did it a few times. And then Covid came, I had not seen him for a while. And then he died.”

There is an ongoing legal case involving seven health professionals. Maradona was receiving treatment for a brain clot shortly before he died. “I want to remember him as a friend and all the memories I have since I was 20, when I met him for the first time,” says Caniggia.

This encounter took place in 1987 in Switzerland 11 months after Argentina had become world champions, memorably driven to this peak by Maradona, who came into his own in three games at Estadio Azteca as he inspired wins over England, Belgium and then West Germany in the final. The shirt he wore in the “Hand of God” win over England was recently sold for a world record £7m by Steve Hodge, the English midfielder with whom he swapped tops at the end. The business of Maradona continues relentlessly even in death.

Caniggia prefers more innocent times. Like in Zurich, when Maradona, seven years older, took El Pajaro – the Bird, one of the nicknames by which Caniggia came to be known – under his wing. Argentina were beaten 3-1 by in a friendly to inaugurate the next World Cup. “The only positive thing about the game is that I met Cani,” noted Maradona in his autobiography.

“He came from Naples as he was playing there,” recalls Caniggia. “And he said, ‘I know you through my brother. He talked to me a lot about you. I know you. A friend to him is a friend to me.’ From then on we were very close.”

The brother to whom Maradona was referring was his younger sibling, Hugo. Caniggia was two years older but they had played together at youth level for Argentina. Shockingly, Hugo passed away after a heart attack aged just 52 last November, a year after his brother’s death and days after attending a game at Napoli’s renamed Stadio Diego Armando Maradona, where the first anniversary of the legend’s passing had been marked.

“He was very stressed out because of his brother,” reports Caniggia. “They were very close.”

Hugo lived latterly in Naples, where Maradona is of course revered, and where it’s practically impossible to turn a corner without being confronted by a Maradona- inspired mural. The 2019 Asif Kapadia-directed documentary on Maradona depicts that craziness well. Caniggia preferred it to the docuseries tracking Maradona’s time as manager at the lowly Mexican club Dorados de Sinaloa, although he believes there was still too much emphasis placed on his mafia links.

“Naples is Naples,” says Caniggia. “It showed the chaos around him. A great personality and a great heart. He was a great friend. People do not know the real Maradona. Believe me. He was always arrogant? No he was never like that. People who do not know him might think that, nose in the air. But he was not like that.

Caniggia is pained that he was unable to go to his friend’s funeral. “They wanted to do it very quickly. I was in Mexico. And then there was Covid …

“Sofia told me,” he continues. “Her father called her. I did not know. I was not watching the news. It was midday in Mexico. And she told me. It seems Diego died. What? I thought at first … many times before there have been false stories that Diego had died. I said, ‘are you sure?’ After that I saw it on TV. I called some journalists and some people around him and they said, it is true. It was a big shock. I was so sorry I was abroad.

“You did not think he could die at that age, such a great personality like him. But he was not so good at the end.”

Caniggia prefers to linger on the good times, such as when Maradona played a sublime pass through to him for the winning goal in La Albiceleste’s last 16 victory over Brazil at Italia ‘90. “I was playing as the only striker, with Diego just behind me,” recalls Caniggia. “It was difficult to play. But we were strong personalities.

“Never in Argentina history had they played with one striker – I was the first!” Another memory is “The Kiss”, another famous photograph, from 1996, of Caniggia – and there’s no other way of putting it – snogging Maradona after scoring one of his hat-trick goals for Boca Juniors in a 4-1 win over River Plate.

And then there’s the incredible, little-known story of how Caniggia very nearly became the Roger Milla for a new generation when he was invited to return to the Argentina squad coached by Maradona prior to the 2010 World Cup. He had been fully retired for more than four years and was about to turn 43. Milla became the oldest player to score at a World Cup at USA ’94 when, aged 42, he struck against Russia having come out of retirement with memorable results at Italia ’90 four years earlier.

Before a game in Barcelona against the Catalonia national side, Caniggia met Carlos Bilardo, then Argentina’s general manager, in the lobby of the team hotel. The man who handed him his international debut had a stunning proposition.

The plan was for Caniggia to return to Argentina to sign for Arsenal de Sarandi. He would stay with Bilardo and get match fit with a view to Maradona employing his old teammate as an impact sub in South Africa.

Caniggia was hesitant. He wasn’t sure he wanted to return to top flight football in Argentina for the privilege of being kicked up and down the pitch. He now kicks himself. “My biggest regret in football,” he says. And he still looks as if he could play for Argentina at this year’s World Cup.