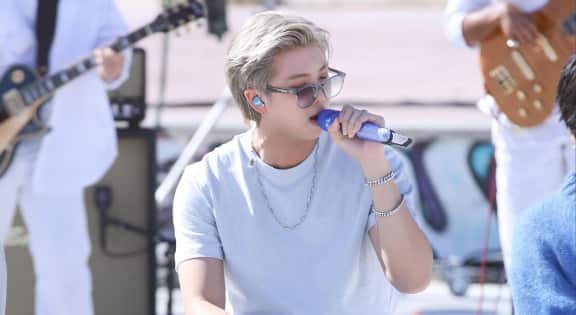 BTS’ temporary hiatus is being discussed and how. BTS ARMY is confident that this is a small break, and the group might return as a whole unit in a couple of years. The band has said that this is an indefinite break. A small section feels the future is uncertain. Anyways, the boys have told fans to only believe what they say, which is that this break is a temporary hiatus, and they will be back soon. Now, fans have connected this to what RM aka Kim Namjoon said in his VLive after the concerts in Las Vegas. He did a long VLive where he spoke on a number of issues. Also Read – Vicky Kaushal reveals how his friends REACTED when they learnt he is getting married to Katrina Kaif

In the VLive, fans spoke about how the band had to deal with haters. RM told ARMYs to not give negative comments any engagement or feedback. He also spoke about how BTS had become mainstream now, and their music was observed by global critics. He said in the VLive, “I’ve been thinking we need to be more directly involved in creating the album in its totality. We need to eventually be able to write, produce, and edit our own music. I think that is one of the reasons some discredit us.” This is on the lines of what J-Hope aka Jung Hoseok said that members need to work on their own for a while to make a comeback that is in full synergy with their best skills. Also Read – Throwback Thursday: Samrat Prithviraj actress Manushi Chhillar recalls becoming Queen of Brazil after being crowned Miss World [Watch Video]

SUGA aka Min Yoongi has spoken about how he is learning musical instruments, vocals and dance. He said that becoming a learner is fun once again. The Korean media portal, Koreaboo has published reactions from some netizens on this. A person commented, “Remember SUGA saying he has gone back to become a trainee… That his schedule’s more packed than a trainee… SUGA looked so happy when he said that… He said it was so fun and that he’s happy he is able to do it… I want to tell people. Our members are these types of people… That they aren’t idols, who are drunk off their success… That they are getting ready to jump higher than ever so please just leave them alone…” Another one said, “I’m not an ARMY, but BTS is really cool. Honestly, if you are as big as BTS, they don’t really have to write their own music because all the best songs are sent to them. But the fact they want to use their own voice and so are taking a break to not lose their identity… And because the leader holds the teams to these morals (they are so cool)…” Also Read – BTS V aka Kim Taehyung’s fans thrilled ahead of his debut appearance at Paris Fashion Week; to travel with Blackpink’s Lisa and Park Bo-Gum in a private plane?