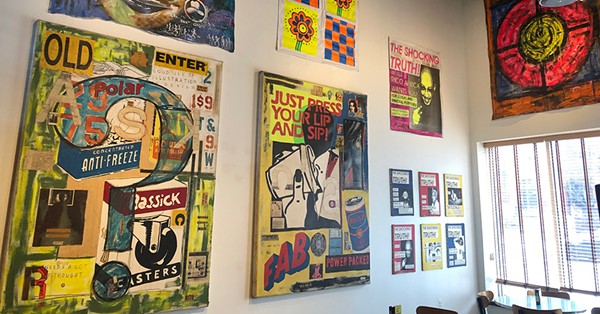 Detroit artist Rico Africa’s colorful paintings are on view at the Cass Cafe starting on Saturday.

When he died in February of complications from pancreatic cancer, Detroit artist Rico Africa left behind a trove of colorful paintings. Those works will go on view in a posthumous retrospective at Detroit’s Cass Cafe that opens on Saturday.

“He was always painting,” Linardos says. “He was a prolific painter.”

Linardos says the show will feature about 50 of Africa’s works. Proceeds from the sales will go to Africa’s mother.

“It’s pretty much everything that had not sold over the years that was in Rico’s possession or that he had friends holding onto,” Linardos says.

Many of the pieces blend collage with oil painting.

“There’s a lot of narrative in his work, a lot of contemporary observations on consumerism, corporate America — it’s all just still so timely,” Linardos says.

He adds, “His work has always had very strong narratives. It’s not like it’s real murky.”

A common motif is the use of bright, almost radioactive colors.

Linardos says he even hosted a couple of shows of Africa’s work at Motor City Brewing Works where the work was illuminated with black lights.

“It literally radiated,” he says. “It was awesome.”

Aside from painting, Africa was also known for his performance art project Transgendered Frankenstein, which featured spoken-word poetry with a live backing band.

Linardos says Africa’s circle of friends is trying to track down the recordings for a possible posthumous release.

“As a personality goes, he was just such a great, supportive guy,” Linardos says. “Just great wit, and really funny, and it comes through in his paintings, too. A lot of the stuff is very, very, very serious, but he also has that really cool ability to not take himself too seriously. A lot of his work has elements of humor, too, and I’ve always respected him a lot for that.”