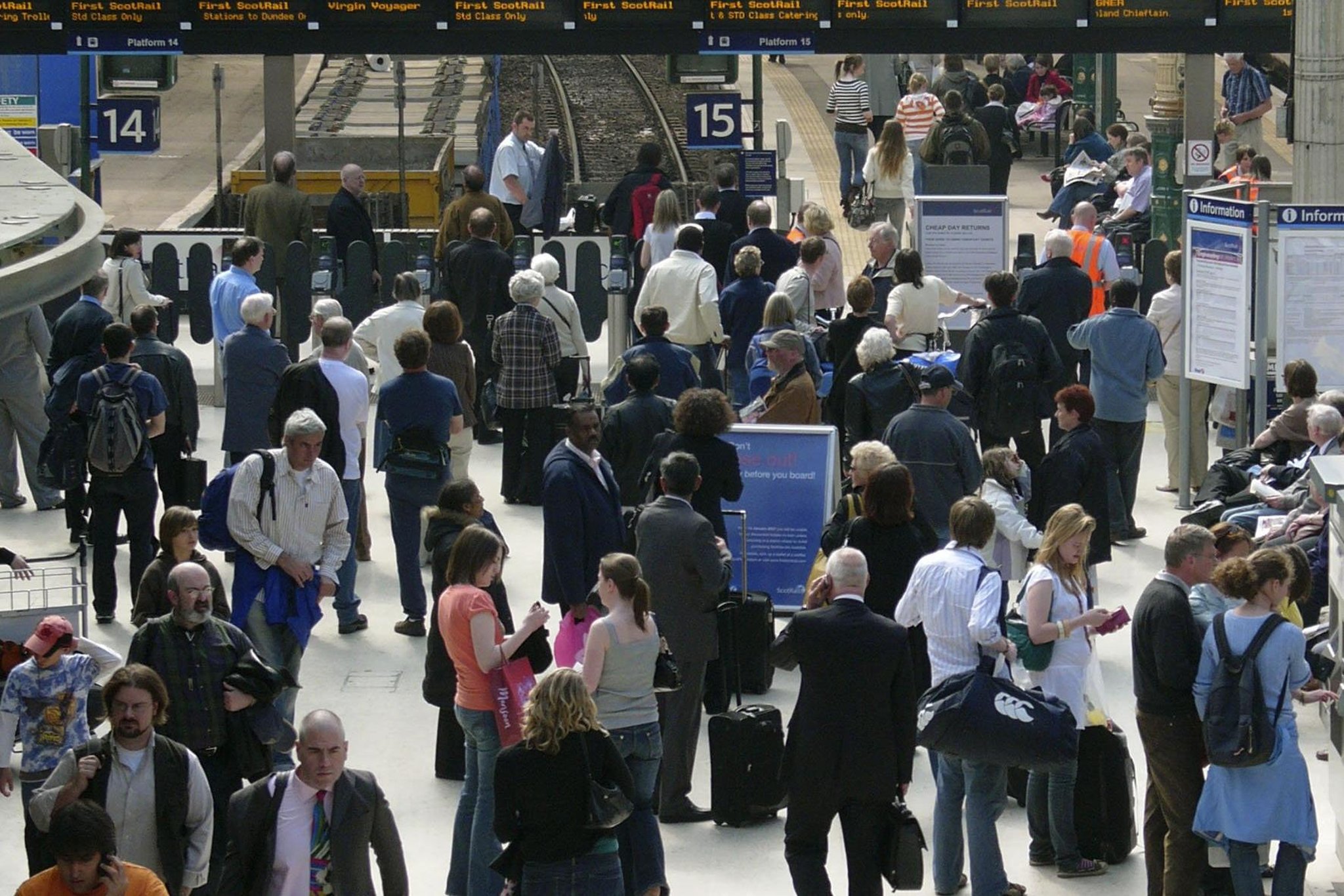 Scottish Government advice on home working has now changed in light of stabilising Covid infection rates, with employers advised to move towards hybrid working, where time is split between home and workplace.

The move away from the workplace is expected to be a long-term shift, with more than a third of Scottish workers (37 per cent) expected to work from home half of the time.

Large volumes of workers support a hybrid model with 89 per cent of staff at RBS – which employs over 10,000 people in Scotland – preferring the flexible approach. At the Scottish Government, which employs more than 8,400 people, the figure is 72 per cent.

Commuters at Waverley Station. The shift to hybrid working this week will lead to a long-term shift away from commuters and office worker heading to city centres. PIC: Craig Stephen.

While business and public transport operators have indicated optimism that decimated footfall and commuter numbers will lift following the hybrid working call from the government, there are concerns the shift in working culture will have a profound impact on businesses and services.

Analysis: Is a ‘hybrid’ approach of working at the office and at home really the…

David Lonsdale, director of Scottish Retail Consortium, said: “We need to see action over and above the rescinding of the work from home order and action to entice people back into city centres.

“The pandemic and government restrictions including the order to work from home have exerted a heavy toll on shopper footfall and retail sales.

“The problem is most acute in our city centres which have suffered from the absence of office workers.

“With the work from home order ending there needs to be a concerted effort to ensure the safe return of office workers and to entice shoppers back.”

He added both the Scottish and UK governments could “lead the way” by outlining their plans for the return of civil servants and quango staff back to their offices.

Mr Lonsdale said high street vouchers, such as the £100 scheme introduced in Northern Ireland, and temporary discounts on public transport and parking could support a revival of city centres.

ScotRail said it will introduce new ticket types to help drive an increase in passenger numbers with timetables and size of trains being reviewed to meet changing needs.

Peak time rail journeys are expected to fall by 27 per cent under a hybrid working model, assuming that 37 per cent of workers are based at home 50 per cent of the time, research for Transport for Scotland found.

The number of vehicle miles driven at rush hour and the number of bus trips taken at peak times is expected to drop by 19 per cent .

The impact of hybrid working will lead to a “sharp drop in demand” for commercial property which could require a “substantial economic development policy response”, the research also found.

A significant impact on the housing market and changes to distribution of people across Scotland may also be felt, given an assumption that people may wish to live more rurally, buy up bigger houses and access green space in the event of another pandemic.

“For most organisations, this introduction of hybrid working is a significant cultural shift.

“What we are finding is that many organisations are considering what hybrid working looks like for them and how they can meet employee demand.

“Longer term this is more complex than perhaps one might think and it will place greater demands on some organisations and greater demands on, for example, line managers. That is very much something we are hearing. This move towards hybrid working will also create new employee expectations which will have an impact on how organisations will attract and retain talent.

“Prior to the pandemic, the adoption of more flexible working practices was very much on our agenda, but progress could be described as glacial. Now we are seeing things move much faster. Many roles previously considered unsuitable for home working have been successfully undertaken at home for quite a substantial period of time. There are lot of lessons we can learn.”

“Longer term, it’s about organisations looking at where hybrid working sits strategically. At the moment, we have a great opportunity but there are also challenges around policy and procedures.”

A Scottish Government spokesman said its staff will move towards hybrid working this week.

He added: “The Scottish Government remains committed to supporting the retail sector. Since the start of the pandemic, businesses including retailers have benefited from more than £4.4 billion in support from the Scottish Government and our non-domestic rates reliefs have saved businesses including in the retail sector, around £1.6 billion since 1 April, 2020.

“Through the combined impact of the upcoming retail strategy, City Centre Recovery Taskforce and the £10 million Scotland Loves Local programme, we are helping our town and city centres and local communities recover.”

A message from the Editor:Thank you for reading this article. We’re more reliant on your support than ever as the shift in consumer habits brought about by Coronavirus impacts our advertisers.