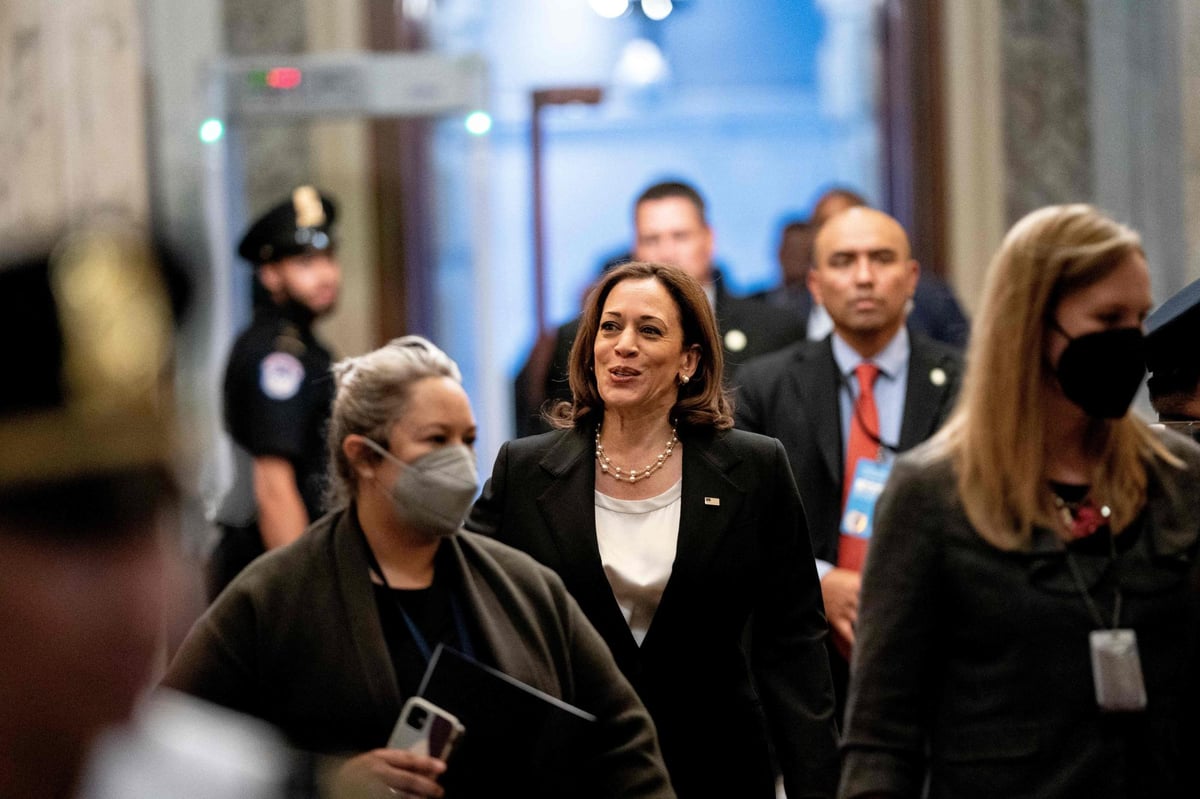 The estimated 740 billion dollar package heads next to the House, where lawmakers are poised to deliver on President Joe Biden’s priorities in a stunning turnaround for what had appeared to be doomed proposals.

“Today, Senate Democrats sided with American families over special interests,” Mr Biden said in a statement from Rehoboth Beach, Delaware. “I ran for President promising to make government work for working families again, and that is what this Bill does — period.”

US Vice President Kamala Harris (C) arrives at the US Capitol in Washington, DC, on August 6, 2022. – Harris broke a 50-50 vote in the US Senate to proceed on the Inflation Reduction Act. After 18 months, a possible victory for Joe Biden’s social and climate reform legislation seems within reach: Congress on August 6 began debating a revised version of the US president’s cornerstone bill, the fruit of numerous compromises with those on his party’s right. (Photo by Stefani Reynolds / AFP) (Photo by STEFANI REYNOLDS/AFP via Getty Images)

The House seemed likely to provide final congressional approval when it returns briefly from summer recess on Friday.

“It’s been a long, tough and winding road, but at last, at last we have arrived,” said Senate Majority Leader Chuck Schumer, ahead of final votes.

“The Senate is making history. I am confident the Inflation Reduction Act will endure as one of the defining legislative measures of the 21st century.”

Senators engaged in a round-the-clock marathon of voting that began Saturday and stretched late into Sunday afternoon.

Confronting unanimous Republican opposition, Democratic unity in the 50-50 chamber held, keeping the party on track for a morale-boosting victory three months from elections when congressional control is at stake.

The Bill ran into trouble at midday over objections to the new 15% corporate minimum tax that private equity firms and other industries disliked, forcing last-minute changes.

Despite the momentary setback, the Inflation Reduction Act gives Democrats a campaign-season showcase for action on coveted goals.

By raising corporate taxes, the whole package is paid for, with some 300 billion dollars extra revenue for deficit reduction.

That plan collapsed after conservative Democratic Senator Joe Manchin opposed it, saying it was too costly and would fuel inflation.

Non-partisan analysts have said the Inflation Reduction Act would have a minor effect on surging consumer prices.

Republicans said the new measure would undermine an economy that policymakers are struggling to keep from plummeting into recession – with some stating that such a policy would impact the economy and job creation.

They said the Bill’s business taxes would hurt job creation and force prices skyward, making it harder for people to cope with the nation’s worst inflation since the 1980s.