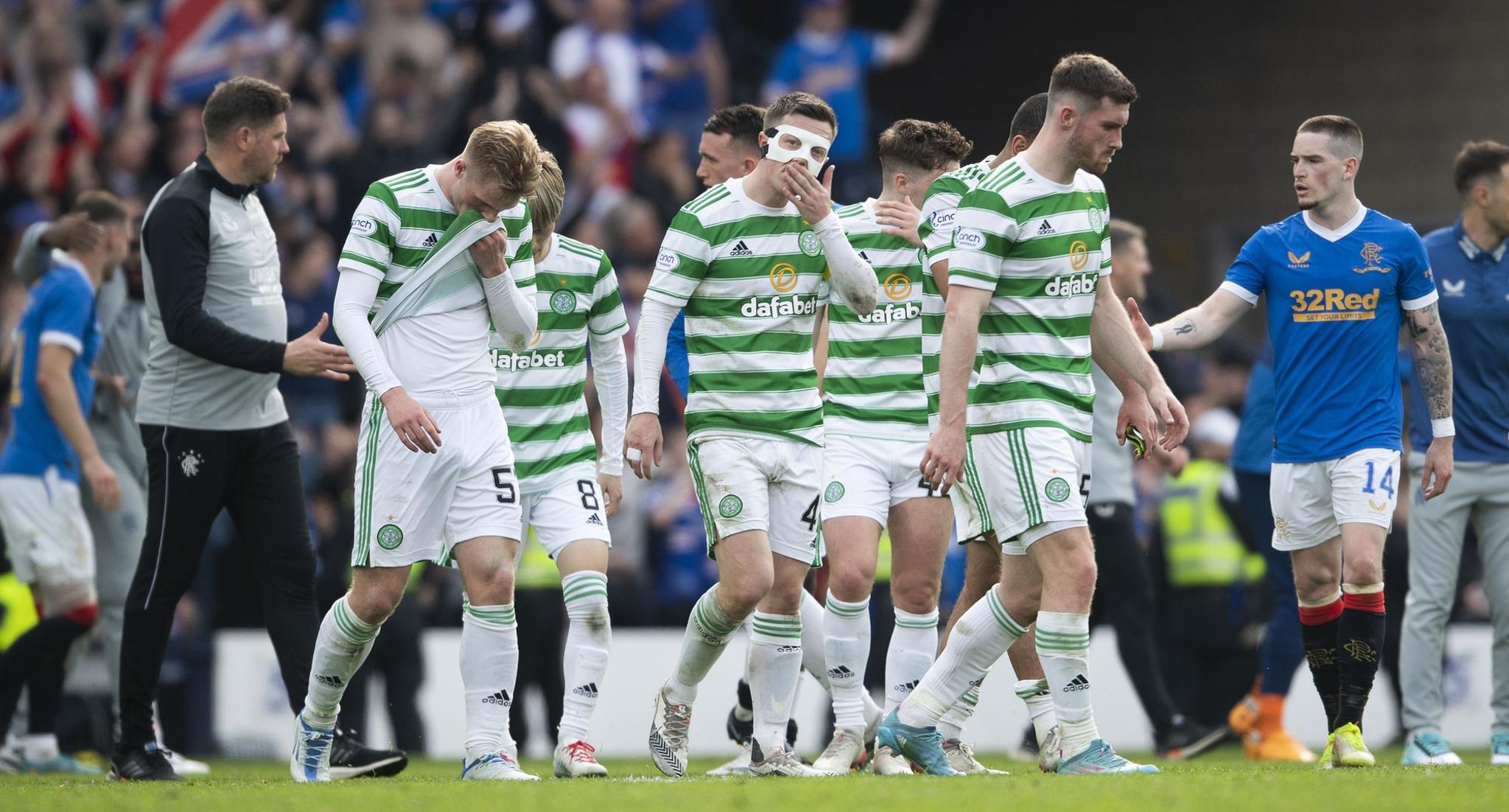 Celtic’s hopes of completing a domestic treble are over after slumping to a 2-1 Scottish Cup semi-final defeat to Rangers at Hampden.

An own goal from Carl Starfelt in the closing stages ended the Hoops pursuit of a fifth treble in six years as their players struggled to find their best form at the national stadium.

Produced a few important saves but could do little to prevent either of Rangers goals. Beaten by Lundstram’s shot.

Started brightly and teed up Jota in the first-half with a superb cross but his afternoon was cut short after leaving the pitch with a hamstring injury.

Largely untroubled and will feel he should’ve scored with close range effort from a corner which cannoned off the crossbar. Went to ground with cramp in extra-time.

Carl Starfelt directs the ball into his own net under pressure from Fashion Sakala as Rangers take a 2-1 lead over Celtic in extra-time. (Photo by Ross MacDonald / SNS Group)

Cleared a Kemar Roofe header off the line but struggled in the closing stages as Rangers began to assert their authority. Unfortunate to score an own goal after letting Sakala get in behind, which proved decisive.

Solid defensively and supported in attack at every opportunity. Broke the deadlock via a deflection off Bassey. Was taken off at the start of extra-time.

Celtic’s Reo Hatate misses a first half chance during a Scottish Cup Semi-Final between Celtic and Rangers at Hampden Park, on April 17, 2022, in Glasgow, Scotland. (Photo by Craig Williamson / SNS Group)

Lasted longer than expected. Found it difficult to impose himself on the midfield battle and passed up two decent opportunities.

Poor. A passanger during the opening 45 minutes and failed to influence the game. Unsurprisngly withdrawn early in the second half.

Played through the middle in Giakoumakis’ absence. Worked hard and looked a threat at times but the pacy Japanese frontman’s end product let him down.

Not his best afternoon. The Israeli failed to keep tabs on Ryan Kent as he cut inside before dragging a shot wide. Another to suffer from cramp and was subbed off just before the hour mark.

Came on after 60 minutes. Still nursing his way back to full fitness and looked a tad rusty. Will improve over the coming weeks

Displayed some clever touches and brought added creativity to proceedings.

Replaced the injury Juranovic and picked up a booking for a rash challenge. Sluggish in his attempt to stop Arfield’s goal.

Contributed little of note. Didn’t look at his sharpest.

Looked unomfortable as a makeshift right-back in the closing stages.

Not given enough time to make an impression.