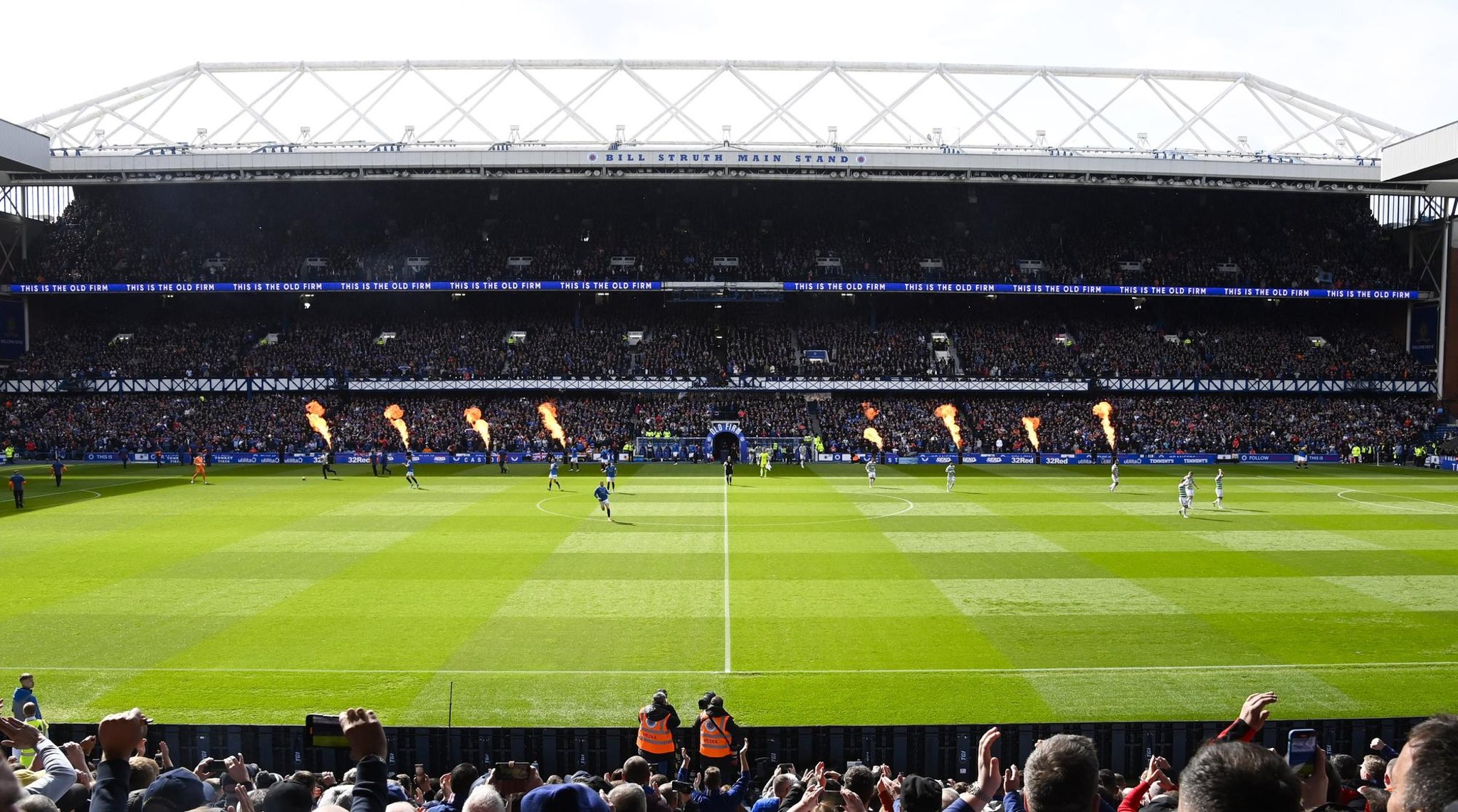 Ibrox was packed for the third Old Firm encounter of the season between the top two teams in the cinch Premiership. (Photo by Rob Casey / SNS Group)

Celtic extended their lead at the top of the Scottish Premiership to six points in title race after beaten rivals Rangers 2-1 at Ibrox to clinch the Glasgow Derby bragging rights.

Ange Postecoglou’s side, who boast a superior goal difference over the reigning champions, secured a potentially season-defining success to leave Giovanni van Bronckhorst’s men with a mountain to climb.

Aaron Ramsey has given the home side an early third minute lead before Tom Rogic levelled the match just four minutes later and Cameron Carter-Vickers’ deflected effort just before half-time proved the match-winner.

The Hoops had to defend resolutely in the closing stages as the hosts applied some late pressure in an attempt to salvage a share of the spoils but the sound of referee Willie Collum’s full-time whistle was greeted by loud cheers from the 700 away supporters.

Not since the 2010/11 campaign has the Scottish Premiership title race been as close at this stage of the season and Rangers started the day three points adrift, knowing defeat would be a knock-out blow to their hopes of retaining the top-flight crown.

The noise inside the stadium was deafening as both teams emerged from the tunnel before kick-off in a game which marked the return of away fans for an Old Firm derby for the first time since December 2019.

The match began at a ferocious tempo and the opening goal arrived after just three minutes when Ryan Kent’s low cross from the left found Calvin Bassey and the defender cut the ball back for Aaron Ramsey to sweep home from eight yards.

Rangers, who were looking to stretch their long unbeaten home record (last defeat in March 2020), continued to pepper the Hoops penalty area in the early stages but their boisterous supporters were silenced in the seventh minute.

Callum McGregor darted into the penalty area before picking out Tom Rogic. The midfielder’s effort was charged down before Reo Hatate’s effort from the edge of the box was parried away by Allan McGregor but Rogic was on hand to pounce on the re-bound.

Play continued to rage from end to end and Rogic fired over on 25 minutes after receiving the break of the ball following a collision between Greg Taylor and Connor Goldson in the box.

McGregor then pulled off a brilliant save to thwart Daizen Maeda after the Japanese frontman looked to take the ball round the veteran keeper. Rogic was quick to react to the follow up but Bassey was in the right place to complete a clearance.

Celtic had a penalty appeal waved away when Maeda went to ground under McGregor’s challenge but they took the lead moments later.

Celtic’s Daizen Maeda goes down in the box looking for a penalty during a cinch Premiership match between Rangers and Celtic at Ibrox Stadium, on April 02, 2022, in Glasgow, Scotland. (Photo by Rob Casey / SNS Group)

John Lundstram failed to clear another dangerous ball into the Gers box allowing centre-back Cameron Carter-Vickers to drill a low shot on the turn, which deflected off Goldson into the net as the visitors ended the opening 45 minutes on the front-foot.

Celtic winger Felipe Jota was then targeted by coins as he prepared to take a corner during shameful scenes.

The hosts had a strong penalty claim of their own on the hour mark when Ryan Jack’s cross appeared to hit the arm of Carter-Vickers.

Frustration grew among the home fans as substitute Fashion Sakala forced a superb one-handed save from Joe Hart before McGregor was equal to Liel Abada’s rising shot as Celtic pressed forward in search of a third goal.

Roofe then steered a header wide of the target late on as the Light Blues pinned the visitors back in their own half but an equaliser wasn’t forthcoming.

It was Celtic’s second Glasgow Derby success of the season and by far the most important one as victory ensured they are now firm favourites to the trophy.

The result underlines Celtic’s strength in depth, given they trailed Rangers by six points at the end of 2021.