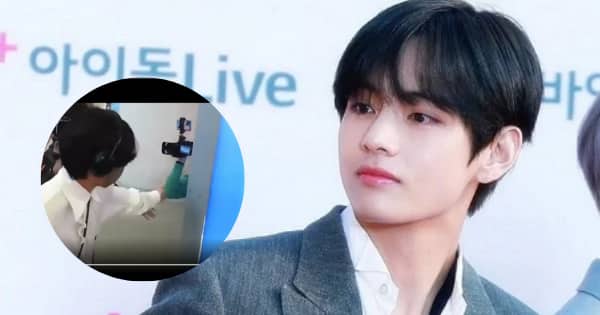 BTS V aka Kim Taehyung is one of the most caring members. He has always shown his caring side towards the ARMY, staff and everyone in general and won several hearts. A couple of days ago, BTS V returned to Seoul, South Korea. And there were loads of K-media folks waiting at the Incheon airport for the Bangtan Boys – Jin, Suga, J-Hope, Jimin, V and Jungkook to return. Rm had stayed back for his schedule but he returned early this morning. Now, a video of V aka Kim Taehyung from his Incheon airport spotting is going viral. In the video, Taetae is seen warning a female reporter as she was about to bump into a pillar. Also Read – BTS’ V creates THIS new record on Instagram; becomes the most followed male K-Pop star on the platform

The video is going viral on social media handle how! ARMY is gushing over V’s instincts and warning the female reporter from the same. This is not the first time that V has done such a thing for a reporter. Years ago, when they had been snapped at the airport too, V had protected a reporter who would have had a nasty fall, backwards due to the barricade. He was in front of V capturing a video at the airport and V had yet again warned the reporter. Coming back to the latest video, ARMY is going gaga over V’s caring nature. Check out the latest video here: Also Read – Trending Hollywood News Today: BTS’ V proves he’s a sweetheart, Hugh Jackman’s wife dismisses gay rumours, Kim Kardashian spills secrets and more

taehyung is so cute, he not to let the girl hit herself ? like be careful 🙁 pic.twitter.com/Nog5E3yxG7

However caring V is, it seems he is not so careful about himself. The Christmas Tree singer hurt himself on the last day of the Permission To Dance Concert in Las Vegas’ Allegiant Stadium. There were scratches on his calf leg and he had also put on a bandaid. BTS ARMY had been worried about it but he brushed it off saying that he was excited since it was their last day of the concert. Also Read – BTS: Armaan Malik gets dragged in the ‘controversial’ Jungkook-Jay Park pic; this is how the singer reacted