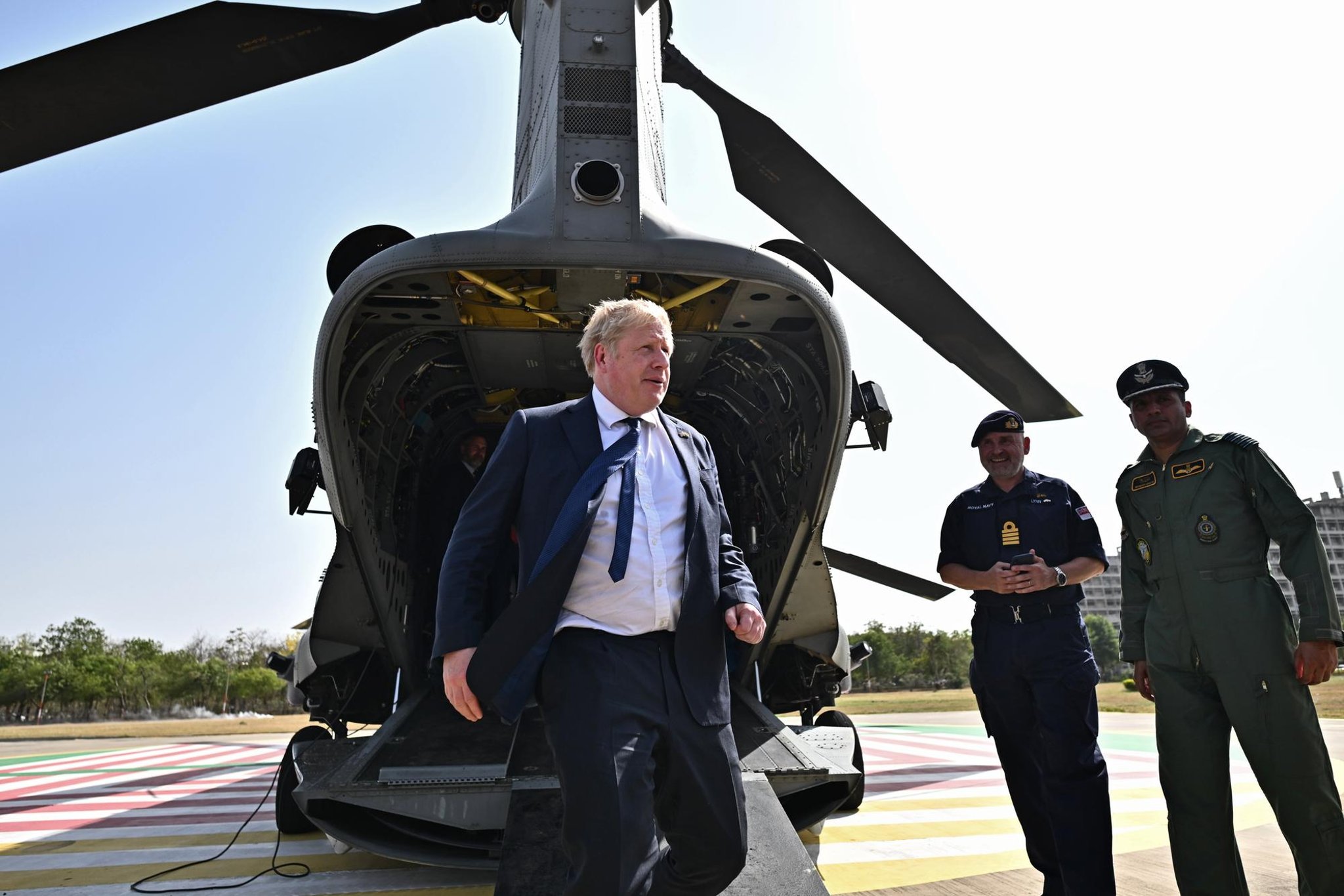 The government had announced plans for an amendment to the vote in the Commons this afternoon which sought to delay a vote on an investigation into whether the Prime Minister misled parliament.

Facing a backbench revolt however, ministers abandoned attempts to force Conservative MPs to vote for a delay in setting up any investigation.

In chaotic scenes, Tory MPs were told not just they could have a free vote but also stay home, meaning very few Conservative MPs even showed up the debate.

Prime Minister Boris Johnson disembarks from an Indian military Chinook helicopter upon his arrival in Gandhinagar, during his two day trip to India

It paves the way for the Labour bill to almost certainly pass.

Labour leader Sir Keir Starmer said the Prime Minister had tried to “cover up his misdeeds” by taking advantage of the Commons convention not to call someone a liar.

“The Prime Minister has stood before this House and said things that are not true, safe in the knowledge that he will not be accused of lying because he can’t be,” Sir Keir said.

“He has stood at that despatch box and point blank denied rule-breaking took place, when it did.

“As he did so, he was hoping to gain extra protection from our good faith that no Prime Minister would deliberately mislead the House.”

The scale of Tory unease was set out by Public Administration and Constitutional Affairs Committee chairman William Wragg, who confirmed he had submitted a letter of no confidence in Mr Johnson’s leadership.

“I cannot reconcile myself to the Prime Minister’s continued leadership of our country and the Conservative Party,” he told MPs.

In a scathing speech, Mr Wragg said: “There can be few colleagues on this side of the House I would contend who are truly enjoying being Members of Parliament at the moment.

“It is utterly depressing to be asked to defend the indefensible. Each time part of us withers.”

Earlier Mr Johnson insisted he welcomed scrutiny of his conduct but said MPs should have the “full facts” before deciding whether a Commons committee should look into allegation that he misled the House with his denials about Downing Street parties during the coronavirus lockdown.

Mr Johnson denied misleading MPs but said the Commons should wait for the conclusion of the police investigation and the publication of senior official Sue Gray’s report into the parties before deciding whether the Privileges Committee should launch an inquiry.

The Prime Minister is is missing the Commons vote because he is on an official visit to India.

Asked on the first day of his trade mission whether he knowingly or unknowingly misled Parliament, Mr Johnson said: “Of course not.”

He told reporters: “I’m very keen for every possible form of scrutiny and the House of Commons can do whatever it wants to do.

“But all I would say is I don’t think that should happen until the investigation is completed.”

The Prime Minister has resisted calls to resign from opposition MPs and a handful of Tory rebels, and told reporters on his flight to Gujarat that “of course” he would fight the next general election.

Pressed on whether there were no circumstances under which he would consider resigning, Mr Johnson told journalists travelling with him: “Not a lot that spring to mind at the moment.

“But if you want to sketch some out I’m sure you could entertain your viewers with some imaginary circumstances in which I might have to resign, but I don’t propose to go into them, I can’t think of them right now.”

Mr Johnson’s aides are braced for him to receive multiple fines, having already been handed one fixed-penalty notice for the gathering on his 56th birthday.

He is thought to have been at six of the 12 events under investigation by Scotland Yard.

Mr Johnson continued: “Politics has taught me one thing which is you’re better off talking and focusing on the things that matter, the things that make a real difference to the electorate and not about politicians themselves.”

Asked if that meant partygate did not matter to the public, he said: “You’re better off talking about things other than politicians themselves, is my view.”