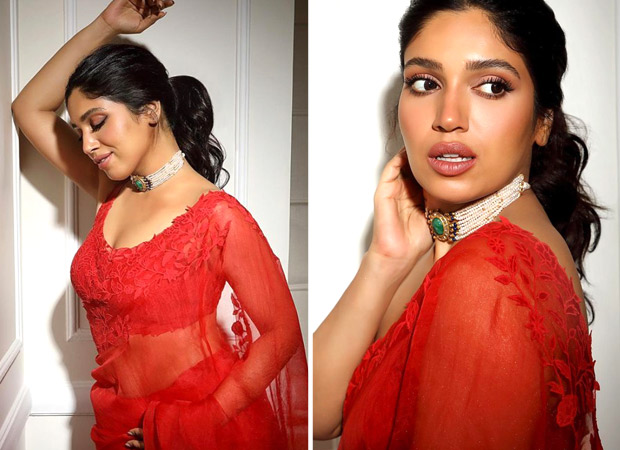 Raksha Bandhan’s trailer was finally launched on June 21 after a long wait. The film, which stars Akshay Kumar and Bhumi Pednekar in prominent roles, depicts love, bonding, and attachment between brothers and sisters. The comedy-drama, directed by Aanand L Rai, is set to hit theaters on August 11. The complete cast of the film was present in Delhi to launch the Raksha Bandhan trailer. While Akshay Kumar sported a basic white shirt and black pants combination, Bhumi Pednekar added a touch of glam to the event.

During the trailer event, Bhumi looked lovely in an Amrita Thakur red organza saree. Her organza gown was perfectly draped over a sleeveless crimson top with a scoop neck and appliqué stitching. There are no major designs or embellishments to draw attention to the sheer saree. In truth, it has none and relies exclusively on the beauty of its fabric. However, it contains cutwork borders with flowers and 3D embellishments, making her saree standout. Her saree is worth Rs.30,500.

Ensuring her glam matched her outfit, the actress went for her usual makeup look, which included a perfect base, dewy accentuated cheekbones, flushed cheeks, filled-in brows, and her hair styled into a ponytail. Her ensemble was completed with a pair of striking emerald-studded pearl choker.

Meanwhile, on the work front, the actress was recently seen in the movie Badhaai Do alongside Rajkummar Rao. She now has as many as five projects in the pipeline. Bhumi is currently shooting for The Lady Killer alongside Arjun Kapoor. Apart from this, she has Anubhav Sinha’s Bheed with Rajkummar. Bhumi will also be seen in Akshay Kumar’s Raksha Bandhan, Govinda Naam Mera, and a quirky thriller titled Afwah with Nawazuddin Siddiqui.

Also Read: Bhumi Pednekar kicks off the shoot of Afwaah in Jodhpur