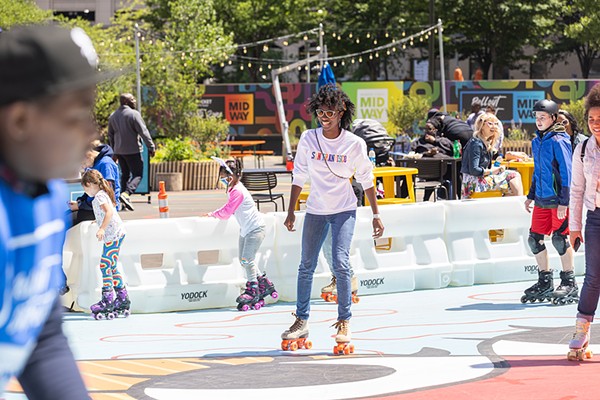 Time to lace up your roller skates and sneakers, as Bedrock announced its Monroe Street Midway is returning to downtown Detroit next month.

Located near Campus Martius Park, the Midway opens up on May 27, at the start of Memorial Day weekend, and will operate through Labor Day, Sept. 5.

Monroe Street Midway will see the return of Bedrock’s partnership with RollerCade Detroit, one of the oldest Black-owned skating rinks in the country, to operate the Midway’s outdoor roller rink, Rollout Detroit.

The rink isn’t the only thing that’s returning. The basketball courts in the sports zone will be back as well, and include one full court and two half courts. This year will see the addition of a mini putt-putt golf course as well.

The outdoor roller rink opened last year, featuring large-scale, on-site art from Detroit artists Sheefy McFly and Phil Simpson. The project serves to activate the site of Bedrock’s delayed Monroe Blocks development. In the winter, it pivoted to a drive-in theater through a partnership with Emagine.

For more information on the Monroe Street Midway, including hours of operation, visit deckedoutdetroit.com/midway.