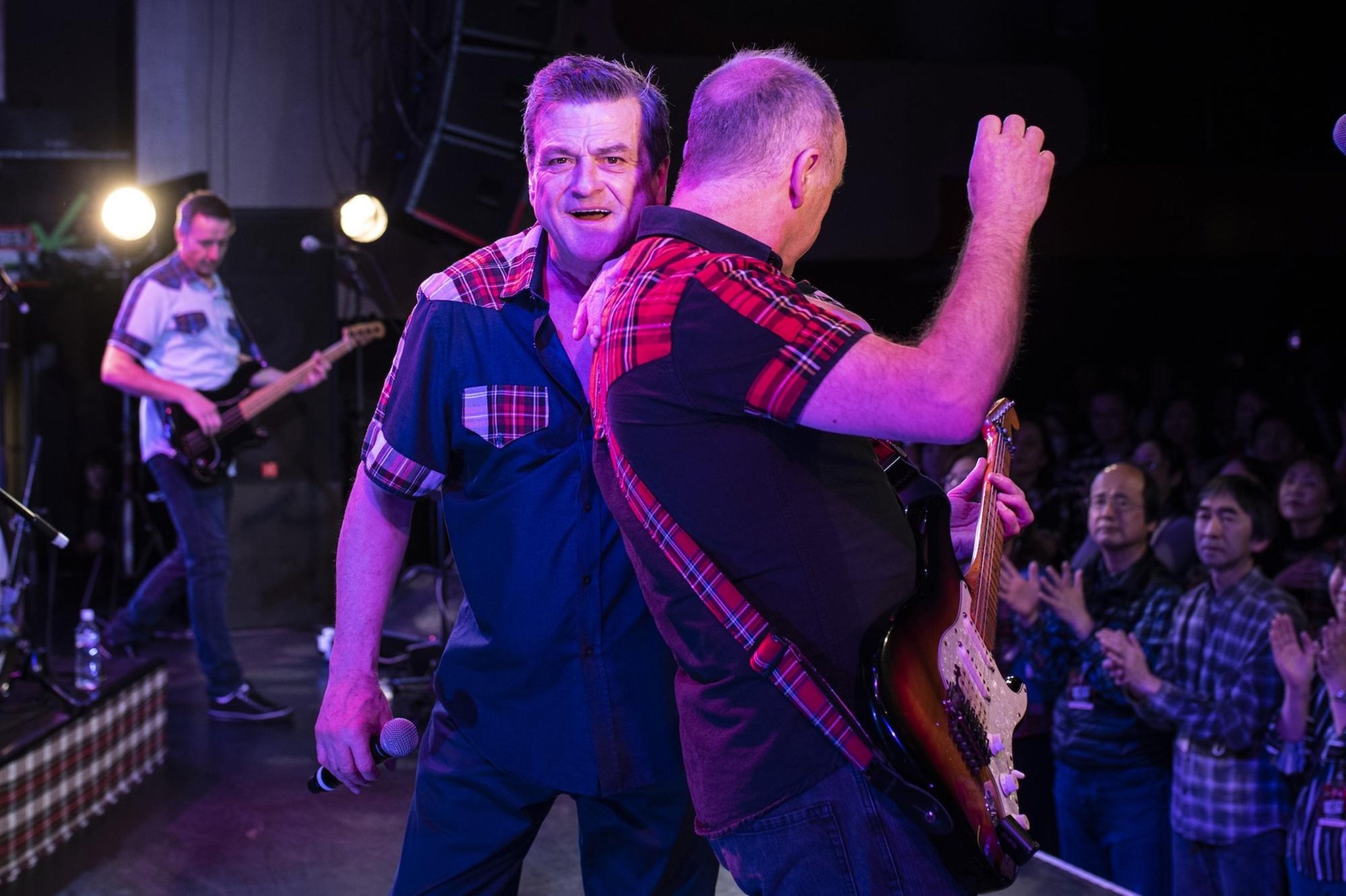 It was one year ago, on April 20, that Rollers’ fans the world over were left devastated by the unexpected news their teenage heart-throb had passed away due to natural causes, aged just 65.Twelve months on, and with the blessing of the singer’s wife, Peko, and son, Jubei, Sam Mokhtary, promoter of McKeown’s last six sold-out tours of Japan, has curated a photo book entitled Les McKeown’s Bay City Rollers: The Last Tour! – an exclusive collection of previously unseen photographs of his friend on the road in Japan.

In February 2020, McKeown performed 10 sold out shows across Japan, it would turn out to be the last tour he’d ever complete. The Last Tour! documents some of those final shows and includes rare insights into life on tour.

Les McKeown on tour in Japan Pic by: Jim Bingham

Mokhtary explains, “My plan is to release these in a professional photobook which will be crowdfunded. Les’ fans are truly some of the most passionate and loyal and it was thanks to them I came to work with Les.

“My company, Alive, based in Japan, started as a crowdfunding site for live music. Fans could request any artist that they wanted to see and if there was enough demand, we’d try to make it happen. The Japanese Bay City Rollers fans found out about us and soon I had hundreds of fans requesting Les to come and play. He was by far our most requested artist.“So, I reached out. Some people might not realise this, but Les was very open-minded and up for trying new things; he loved what we were trying to do. We were able to set up a crowdfunding campaign to bring him to Japan. It was a huge success.”

Mokhtary is using that same model to publish the book with a Kickstarter campaign that is now live.

Recalling the origins of the book, he says, “I’ve never forgotten Les’s birthday because it’s the day before mine. When it last came around I knew it would be a painful day for Peko and wanted to send her something positive to help remember happier times.

“I recalled we’d done a photo shoot in Tokyo on the last tour and although it wasn’t planned, Les had actually pulled Peko in front of the camera towards the end of the shoot and started spinning her round and cuddling her. They were incredibly sweet and heartwarming photos and I thought if I printed those out as a photo album and sent them to her, that would make a perfect gift.“It was only when looking for the photos I realised there were actually hundreds of fantastic pictures of Les from the shoot and live concerts and that they’d never been shared with anyone. I wondered if other people might want to see these photos and the idea to crowdfund a photobook was born.

“Peko and Jubei were kind enough to give it their blessing. From here it’s really up to the fans to decide; hopefully with their support we’ll be able to create a fantastic photobook full of memories of Les.”

Those pledging towards the publication receive exclusive rewards in return. A pledge of £55+ gains Major Fan status and qualifies for a limited first edition hardback of Les McKeown’s Bay City Rollers: The Last Tour! For £70+ Mega Fans also receive a limited edition collectable postcard set and a thank you in the book. £100+ Super Fans get an additional collection of limited edition A3 prints. Finally, those who pledge £1,000+ to become one of 12 Ultimate Fans, will receive four copies of everything in the Super Fan tier as well as an opportunity to share a few words about Les and a picture in the book.

As well as capturing the singer, who scored hits with pop classics like Bye Bye Baby, Give A Little Love and Shang-a-lang, the book will also reveal candid moments. Mokhtary reflects that the Broomhouse-born Roller was one of the hardest working artistes in show business.

He says, “Les was incredibly hard working. He came to play with us every year and every year he wanted to do more than the year before. I’d say, ‘We’ll put a rest day in here’, and he’d go away and have a think. He’d always call me up a few days later and say, ‘I don’t need a rest, let’s do a show.’

“Les was a great performer and every year left people wanting more. He had a great connection with the audience. He talked about the past, the present, told jokes and understood Japanese people and their sense of humour – he’d even throw in some gags using Japanese words. They loved him.”

Like McKeown’s family, fans and band members, Mokhtary was devastated when he heard that Les had passed away.

He remembers, “Les and I spoke a lot during the pandemic… he was really good fun – he’d often send me jokes on WhatsApp. I remember him sending a particularly cheeky one on April 18. Sadly, that was the last message I ever received from him.“A couple of days later a call came in from Les’ number, I picked up and Peko was on the other end. Immediately I knew something was very wrong. All I could say was how sorry I was.“Les was such an active person in my life, all my memories of him involve concerts, energy, excitement. We created a lot of great memories together. It’s so hard to accept he isn’t around anymore and, to be honest, I still can’t really process it. I still feel like he’s telling a great joke somewhere with a smile on his face.”

If you haven’t already, please consider supporting our trusted, fact-checked journalism by taking out a digital subscription