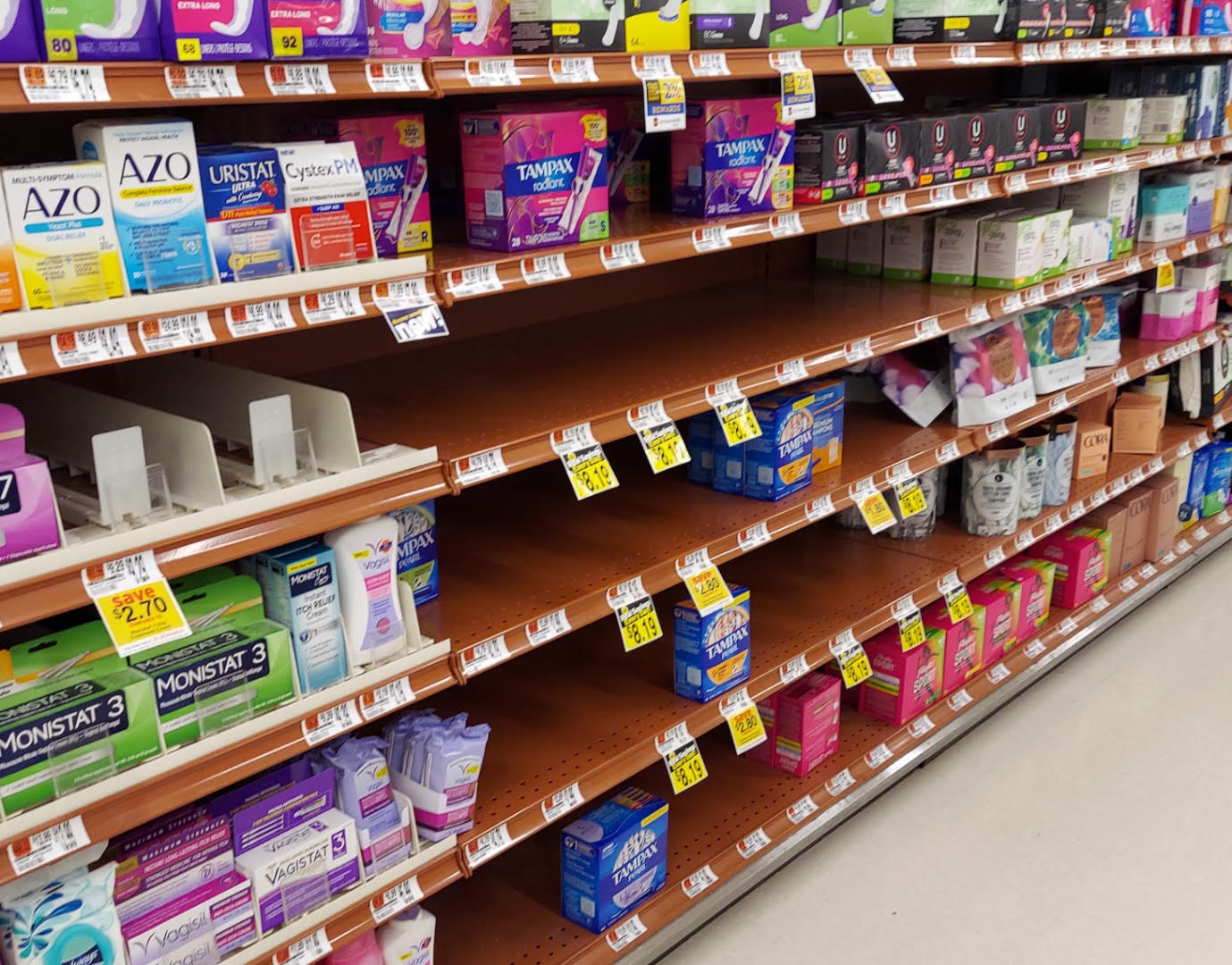 For the past couple of months, tampons have been in short supply around the country, a situation that has caused prices to jump and stressed consumers to contemplate empty or near-empty store shelves with alarm. Here in Maine, it’s being felt too as store shelves have fewer and fewer period products.

The shortage also has repercussions for Maine nonprofit organizations that provide period products such as pads and tampons to people who need them.

One Less Worry, a Rockland-based nonprofit that gave out more than 80,000 tampons and pads to people in the Knox County area last year, expects demand for their help to continue growing. But Sharon Hobson, the founder and executive director of the six-year-old group, said the scarcity and rising prices affect their ability to help.

“I have not been able to get a tampon from Amazon in five months,” she said. “And what’s available, the prices are higher than what you would expect.”

That’s something that many people have been discovering. The average price of a box of tampons has risen nearly 10 percent this year, according to data company NielsenIQ. And that’s if you can find them in stores at all, which is not a sure thing.

The shortage is caused by supply chain disruptions and a lack of cotton and plastic used to make tampons, experts said.

The only American production facility for Procter & Gamble, which makes Tampax brand tampons, is in Auburn. The Tambrands plant there makes as many as 11 million tampons a day, according to the Lewiston Sun Journal. Demand is up for tampons, and the company is running the Auburn plant 24 hours a day to try to keep up, a Procter & Gamble spokesperson told Time Magazine earlier this month.

If women who were stymied by the empty shelves in stores hit the internet in search of tampons, they may be shocked at what they find. On Amazon this week, a 36-count box of Tampax tampons — which sells for about $7.50 at Target — was listed for as much as $26.

Those prices are unthinkable for One Less Worry, which distributes tampons and menstrual pads to 16 schools, AIO Food and Energy Assistance in Rockland, New Hope Midcoast, the Rockland Public Library and other entities. Hobson said that her goal is to find 17 cent tampons, but it’s getting harder to do.

“The whole thing keeps me on my toes now, the way toilet paper did during the first part of COVID. Now I’m always on the lookout for tampons that don’t cost more than 20 cents each,” she said. “When you’re doing 80,000, pennies make a difference.”

Hobson also believes that inflation and general economic worries have led to people making fewer or smaller donations of tampons and pads.

“Dropping off the tampons has slowed down, even though I put a plea out,” she said. “Before, someone might have bought three boxes of 36. Yesterday, it was three boxes of 14. I just think that there’s an overall sense of ‘We don’t know what’s happening with the economy, and we may need to be a little more frugal.’”

Although the tampon shortage has not yet affected the human service agency Preble Street in Portland, communications director Danielle Smaha said that it’s likely to do so in the future. A group called Collect the Cotton made a big donation of tampons to the agency a few months ago, so for the moment it is well-stocked, Smaha said.

“We anticipate that the shortage will probably trickle down and affect our clients, as people who would make donations feel that backlog,” she said. “It certainly is an ongoing need.”

If there’s a silver lining to the shortage, Hobson said, it’s that interest in menstrual cups seems to be increasing. The reusable cup, made of silicone or latex rubber, is inserted like a tampon to catch menstrual flow and is an eco-friendly alternative to other period products.

One Less Worry received a grant this spring to distribute menstrual cups and washable, reusable period pads and has been doing pop-up shops to give them away.

“We’re definitely getting the word out that it’s an alternative,” Hobson said. “Two weeks ago, I did a pop-up in a high school cafeteria, and 35 menstrual cups went out the door that day. That gives me a lot of hope.”