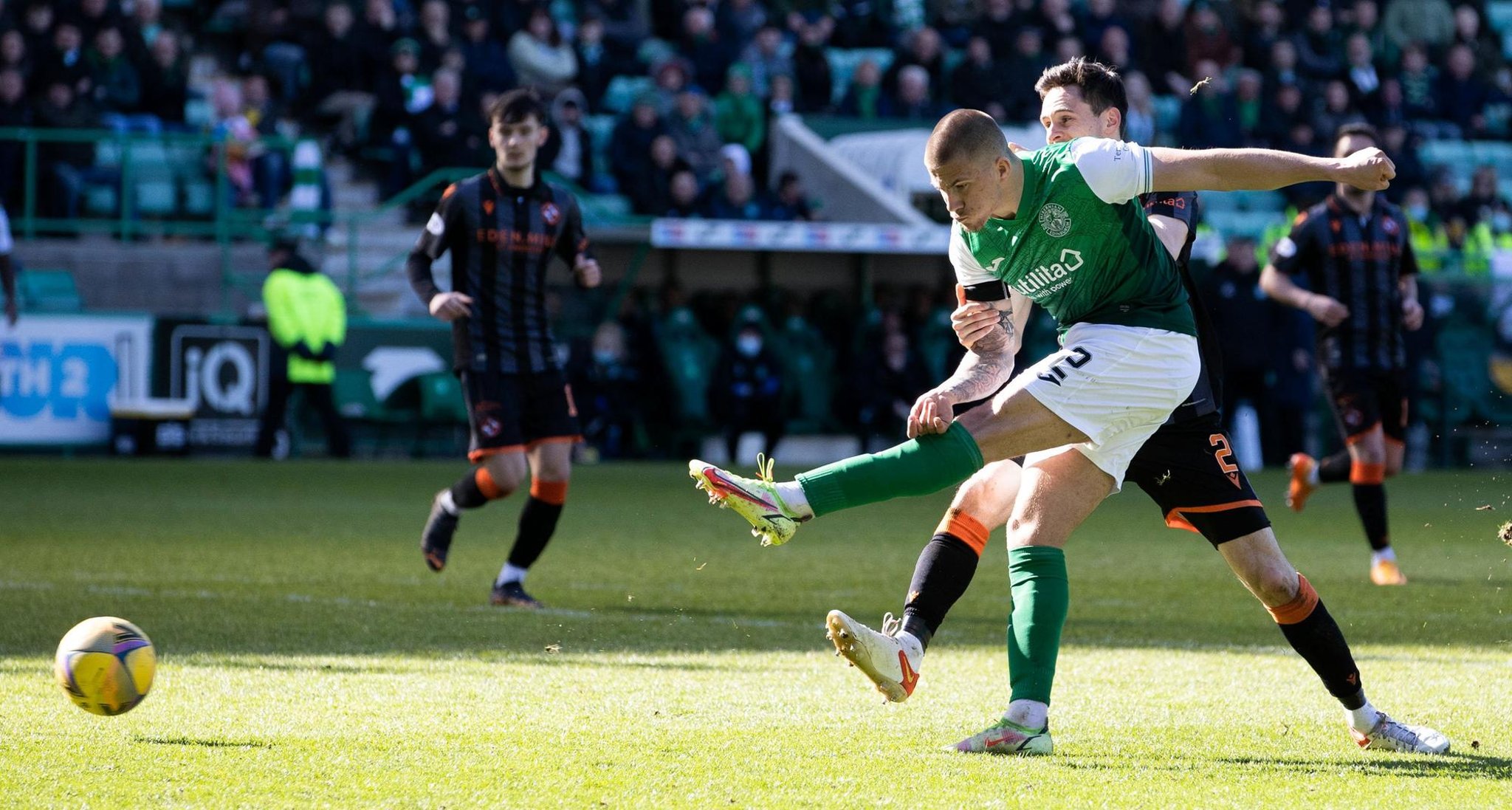 The Arsenal loanee was responsible for earning Hibs a point against Dundee United on Saturday and keeping them in the mix for a top six slot. And if he can replicate his debut performance when the Leith travel across Edinburgh to face their capital rivals in the final round of fixtures before the split, his presence will be all the more appreciated.

“There’s a bit of added pressure for the derby,” admitted the Englishman, who knows he has returned for a period of the season brimming with possibilities but fraught with danger.

Securing top six would give them a serious shot at a European place, while the upcoming Scottish Cup semi-final takes them tantalisingly close to silverware but lose the back to back derbies and the season would have a disappointing conclusion.

Hibs’ Harry Clarke makes it 1-0 during a cinch Premiership match between Hibernian and Dundee United at Easter Road, on April 02, 2022, in Edinburgh, Scotland. (Photo by Alan Harvey / SNS Group)

“Obviously, we have two in a row and it means a lot to the fans and the club,” acknowledged Clarke, who spent most of his rehabilitation from a tendon tear back in London with his parent club.

“To play in my first derby, with so much importance to the game, should be good.

“It was good to be back and we have a big few games coming up so hopefully, I can hit the ground running,” added the 21 year-old.

He did that on Saturday but he believes there is even more to come.

“Chris Cadden has got a good delivery and it worked for my goal. The manager wants me to get in at the back post and use my pace, which I didn’t really do a lot [against United]. He said I can be an attacking threat which is nice.

“I was a bit leggy at the end. But hopefully, in the next week or two I will be back fully fit.”

As it stands, it would take an amazing sequence of events to deny Tam Courts’ Tannadice side their place in the top half of the Premiership but beneath them there are six teams vying for the remaining two berths, one of them being Hibs, which is why there was frustration that they could not turn their superior second half performance into all three points.

“I think a win would have been the most important thing, but it was nice to get a goal and finally get to play here,” said Clarke.

Having gone behind to a Ross Graham header in just the 10th minute, the home side grasped the urgency of the predicament. But it took them until almost half-time to conjure up the appropriate response.

There are signs of training ground efforts but the execution was not crisp enough in that ponderous opening 45 minutes. That equated to no real shots on goal until Clarke, who made his Hibs debut as a left-sided wingback, popped up. His first effort was fired wide, the second found the net

That lifted Hibs who were a different proposition in the second half, although a glaring miss from Elias Melkerson late on was an example of the work that still has to be done in the final third.

And with big games coming thick and fast, that needs to be evident sooner rather than later.