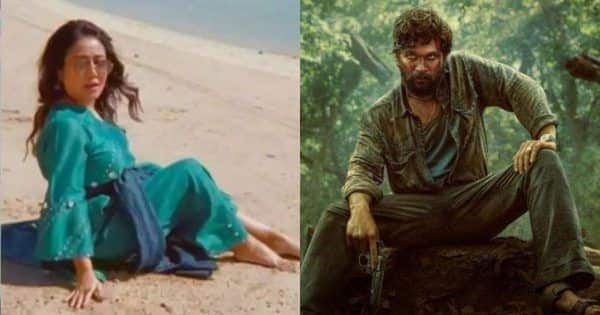 Pushpa’s song Samantha Ruth Prabhu has become a rage. Now, Neha Kakkar is the latest celeb to perform on the song which was picturised on Samantha and Alli Arjun. She took to Instagram to share the video. Dressed in a green dress, she can be seen dancing on a beach. Her caption read, “Loved the movie Pushpa, performances and its music, thought this is the least I can do to show my appreciation! #NehaKakkar.” Her video got a reaction from Allu Arjun who took to the comments section and wrote, “Thank you for all the love & appreciation. Humbled.” Have a look at her video below: Also Read – Trending TV News Today: Ayesha Singh’s Oo Antava reel goes viral, Aditya Narayan-Shweta Agarwal announce pregnancy and more

The actress even uploaded a longer version on YouTube. Have a look at it below: Also Read – After Allu Arjun’s Pushpa success, Kangana Ranaut says, ‘South industry should not allow Bollywood to corrupt them’

Meanwhile, Samantha seemed overwhelmed by the love she and the song are getting. She wrote on Instagram, “I played good, I played bad, I was funny, I was serious, I was a chat show host too. I work really hard to excel at everything that I take up but being sexy is next-level hard work. Phew, #ooantavaooooantava Thank you for the love,” she wrote. Also Read – Rashmika Mandanna trolled for her ‘teeny-weeny’ shorts; ‘Upar itna dhaka hua, niche pura khali,’ say fans – watch video

Pushpa: The Rise is directed by Sukumar and the makers are already working on its second part. While announcing the second part, the makers had issued a statement saying, “The storyline and the characters took on lives of their own and grew to a span that required the movie to be released in two parts. The excitement we witnessed for ‘Introduction To Pushpa Raj’ was phenomenal and we are determined to take it all to the next level by releasing the film as a duology. We have the best stars, artists, and technicians aboard and we hope to give the audience a memorable experience in the theatres through this story.”