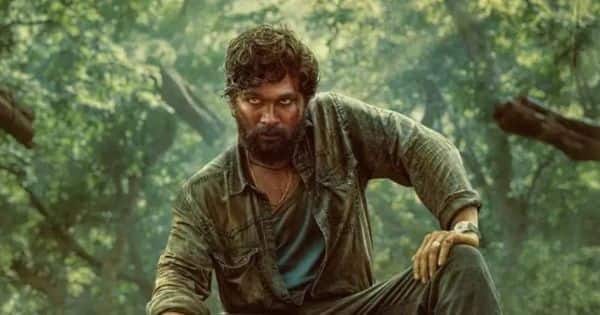 Pushpa actor Allu Arjun had to pay a fine recently for violating traffic rules, according to reports. The Hyderabad Police reportedly gave a challan to the actor as his Land Rover Range Rover luxury SUV was tinted with black film. According to reports, he was fined Rs 700. As you might be aware, the use of black film on the windows of the car is banned in India. Despite the ban, many celebrities continue to use them. Earlier Kalyan Ram was also stopped for the same thing. Telugu director Trivikram Srinivas was also caught by the Hyderabad Traffic police earlier on Monday for violating traffic rules. The Ala Vaikunthapuramuloo maker’s vehicle was stopped at a busy centre in Hyderabad after the police noticed tinted window shields. He was fined by the cops. Also Read – Bade Achhe Lagte Hain 2: Fans lose calm over Nakuul Mehta, Disha Parmar’s romantic moment; go gaga over his gentle caresses, warm embrace

Recently, the Hyderabad traffic police also stopped Jr NTR and Manchu Manoj‘s vehicles, as they had similar black shields covering the windows of their vehicles. Also Read – Bridgerton 2: Five shows to watch if you already miss the racy Netflix series

He had added, “@tarak9999 for a spectacular show. Brilliant Presence by respected @ajaydevgn Garu & our sweetest @aliaa08. And my spl wishes to @mmkeeravaani garu, @DOPSenthilKumar garu, Dvv Danayya garu & many others. Thank you all for making INDIAN CINEMA proud. This is a Kille R R R ! (sic).”

(With inputs from IANS)