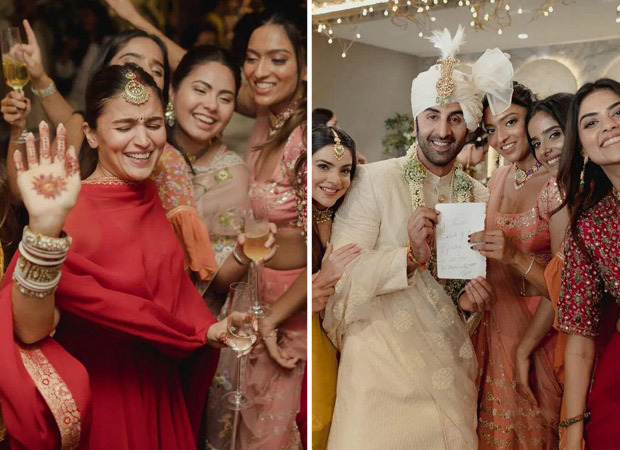 Alia Bhatt and Ranbir Kapoor tied the knot on April 14 in an intimate ceremony held at the latter’s Bandra residence, Vastu. The wedding festivities were small yet joyous with family and friends joining the couple to celebrate their union. Alia’s girlfriends who turned bridesmaids for the wedding were in their best spirits and had the bride’s back throughout the festivities and the latest unseen pictures from the ceremony are proof.

Ever since the wedding, inside pictures from the celebration have been doing the rounds on social media. Recently, pictures of Alia dancing with her bridesmaids went viral. In some of the pictures, Alia can be seen in a red suit which she wore for the sangeet ceremony and is surrounded by her bridesmaids. In one of the pictures, Ranbir, dressed as the groom, is seen posing with the bridesmaids and is seen holding a note. In another picture, Ranbir and Alia are seen posing with all of Alia’s friends post the wedding ceremony making for a picture-perfect moment.

Apart from the two-day wedding festivities, the couple also hosted a wedding party on Saturday which was also attended by some of their friends from the film industry.

Meanwhile, Ranbir and Alia were dating for five years before they tied the knot. Their relationship began when they started working on the film Brahmastra. Directed by Ayan Mukerji, Brahmastra will be released on September 9, 2022.