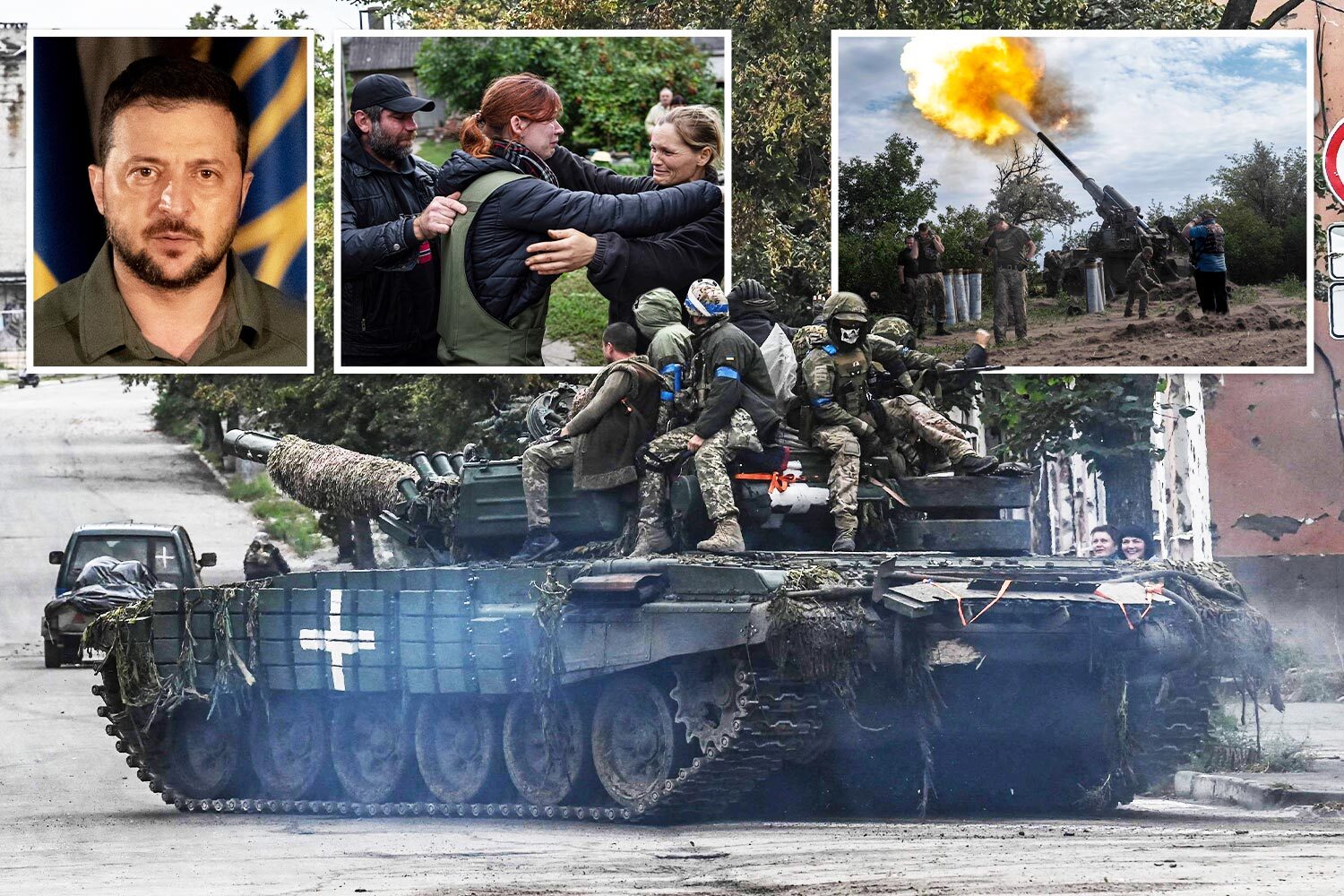 A LIGHTNING assault by Ukraine that freed thousands of square miles from Russian occupation has left both sides asking if the blitz could be the tipping point in the war.

For months, Ukraine’s commanders had talked up a push in the south, 250 miles away from the most recent surge, where British and US long-range rockets were used to blitz bridges and ammo dumps to isolate Russian forces.

The result was Russian generals reinforced their southern front and left their northern flank exposed.

But the speed of the Russian collapse in the north has caught both sides by surprise.

President Zelensky hailed his forces’ gains, saying: “We are moving in only one direction — forward and towards victory.”

Ukraine’s first goal with its northern onslaught was to retake the town of Balakliya, 40 miles south east of Kharkiv city, as a staging post for an attack on the Russian stronghold of Izyum, 25 miles beyond.

Russian troops captured Izyum after a month-long battle in March and the town became a supply hub for its devastating Donbas offensive.

As Ukraine’s tanks charged through the countryside on September 6, under cover of darkness, the Russian front lines began to collapse.

Ukraine’s Defence Minister, Oleksii Reznikov, said the assault was designed around long-range rocket artillery systems donated by Western allies — including British GMLRS and US HIMARS systems with a range of more than 40 miles.

The guns had opened up at least 24 hours earlier in a “softening up” operation. The attack relied on surprise and utmost secrecy.

As the first reports emerged of clashes outside Kharkiv, Ukrainian officials refused to acknowledge them.

Then, 48 hours after it started, President Zelensky revealed that 385 square miles had been liberated. By Saturday, he said the area had doubled to 770 square miles. Now Ukraine says it has captured some 2,315 square miles, an area the size of Devon, and its troops are still pushing forward.

The MoD said some Russian units retreated “in relatively good order and under control, while others fled in apparent panic”.

Moscow tried to disguise the retreat as a “tactical regrouping”.

But the Kremlin could not hide its worst defeat since the retreat from Kyiv in the first weeks of the war.

Ukraine’s iconic blue and yellow flag was raised in Izyum and Kupiansk, choking off a supply line to Russian troops further south.

The rout sparked a furious backlash in Moscow, where Putin is facing growing dissent from far-right hawks who want even more bloodshed and carnage to crush Ukraine’s resistance.

Boris Nadezhdin, a former MP, warned Russia faced certain defeat without mass mobilisation. He said: “It is impossible to defeat Ukraine using resources Russia is fighting with, and with its colonial war methods, using contract soldiers, mercenaries and no mobilisation.”

Russia has lost an estimated 80,000 soldiers who have been killed, captured and injured or who have deserted, according to government estimates here.

But Putin’s refusal to call the war a war has hamstrung attempts to mobilise reserves. The despot insists on calling his slaughter a “special military operation” which has led to increasingly desperate measures to find cannon fodder for the front.

A video emerged this week of a Russian mercenary leader Yevgeniy Prigozhin promising to quash prisoners’ sentences if they volunteer to fight. He was shown in a prison yard saying: “If you serve six months, you are free.” But he added: “If you arrive in Ukraine and decide it’s not for you, we will execute you.”

Some 40 elected officials in St Petersburg signed a petition after the Kharkiv collapse urging Putin to resign. A pundit on state TV asked if the army was “fit for combat”.

While Putin was pictured opening a Moscow Ferris wheel as his army beat its retreat, a pro-war blogger asked, “What’s wrong with you?” And the President’s Chechen henchman Ramzan Kadyrov blasted “mistakes” by Russian generals in a post to 2.4million followers on social media.

The Kharkiv assault ended months of stalemate which had seen Russian forces inching forward in areas where they could blast the frontlines to nothing with overwhelming artillery.

General Sir Richard Barrons, a former joint chief of the UK Armed Forces, said it was too early to tell if the push was a tipping point.

He said: “The next few weeks will be key, as we see whether Ukraine can press on or consolidate its gains.”

The message from inside Ukraine is clear.

President Zelensky vowed to keep storming forward as he swooped into the bomb-blitzed rubble of liberated Izyum on Wednesday. And he shrugged off Russian threats to choke off the world’s gas supplies. He said Ukraine would always choose freedom and hardship over conquest by Moscow.

He said: “Cold, hunger, darkness and thirst are not as frightening and deadly for us as your ‘friendship and brotherhood’.

“History will put everything in its place. And we will be with gas, light, water and food . . . and without you!” The scale of Russia’s defeat triggered warnings Putin might unleash nukes to regain the upper hand.

Nato former Deputy Secretary General Rose Gottemoeller warned: “I fear that they will strike back now in really unpredictable ways and ways that may even involve weapons of mass destruction.”

The former US diplomat warned Moscow could order a “nuclear demonstration strike, either a single strike over the Black Sea or perhaps a strike at a Ukrainian military facility in order to strike terror not only into the hearts of the Ukrainians, but also the global partners and allies of Ukraine”.

Cold, hunger, darkness and thirst are not as frightening and deadly for us as your ‘friendship and brotherhood’. But history will put everything in its place. And we will be with gas, light, water and food . . . and without you!”

For frontline fighters in Ukraine, the Kharkiv blitz was a “a massive morale boost” and a reminder to the world that its troops can fight and win.

“Russia is not unstoppable,” one told The Sun. “We keep on showing the world we can win. We need the world to keep sending us weapons.”

Britain has sent Ukraine at least six GMLRS long-range rocket systems, as well as thousands of anti-tank, anti-air and anti-ship missiles. Defence Secretary Ben Wallace vowed to keep training troops in the UK and sending Ukraine support as long as it is needed.

Experts expect the fighting to dip in mid-October, when autumn rains will turn the ground boggy, making it harder for troops to manoeuvre.

Shorter days and freezing conditions will limit operations in winter, but General Barrons said Ukraine would be determined “to keep the fight alive”.

He said the ongoing battle in southern Kherson province was “strategically more important for both sides”. Ukraine has used HIMARS rockets to cut a key network of bridges that connect Russian soldiers on the west side of the Dnieper river, but progress there is much slower.

General Barrons said: “Ukraine is being patient. They are isolating the Russian forces. They cannot afford to send their youth into a premature assault on Kherson. One thing we can be sure of is the war will last into next year.”

Nato’s Secretary General Jens Stoltenberg echoed the warning and said the West should expect a long battle ahead.

He said: “It is encouraging to see Ukrainian forces have been able to take back territory and also strike behind Russian lines.

“But we need to understand this is not the beginning of the end of the war, we need to be prepared for the long haul.”