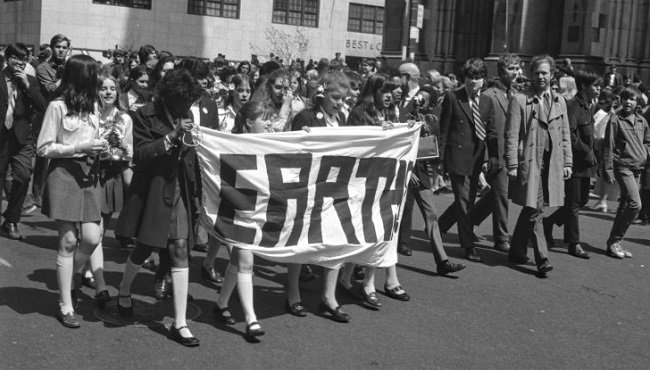 GRAND RAPIDS, Mich. (WOOD) — With the globe warming and the polar ice caps melting at an unprecedented rate, most climate scientists are predicting doom and gloom barring drastic changes from humans across the world. Though eyes are focused on the 21st century and beyond, the environmentalist movement is shockingly young, firmly taking root less than 60 years ago and encapsulated by Earth Day, which is Friday.

The holiday came from the work of Wisconsin Sen. Gaylord Nelson. According to the Earth Day network, Nelson had been concerned about the deterioration of America’s environment long before the first Earth Day in 1970. In the 1960s, cars chugged leaded gasoline by the gallon, factories spit out pollutants with impunity and most of the world spun on, unaware of the health hazards and environmental destruction in their wake.

For Nelson, the tipping point happened in January 1969, when headlines started pouring in from the West Coast. A well owned by Union Oil had blown about six miles off the coast of Santa Barbara, California, leaking an estimated 3 million gallons of crude oil.

Within days, the oil had reached the shoreline, turning Santa Barbara’s beaches dark black. At its peak, the oil slick stretched 35 miles. Thousands and thousands of birds and other sea life were killed. President Richard Nixon and a cadre of lawmakers, including Nelson, visited Santa Barbara to see the damage firsthand and learn more about what they could do.

Barry Cappello, the former city attorney for Santa Barbara, shared his story with Pacific Standard as part of an oral history of the 1969 spill. He said the shocking aspect of the spill was the incompetence of Union Oil and the government agencies. There was no clean-up plan. Government officials had bales of hay brought in and hired people off the street to lap up the oil with hay and pitchforks.

“This could probably never happen today, because no government agency would ever allow them to drill a well the way they drilled in this well,” Cappello told Pacific Standard. “Today, you have governmental agencies to monitor this. You can’t put a platform out without having a detailed plan on how you’re going to do it, what’s going to be involved. … Then, there was nothing. No governmental agency. Zero.”

In the wake of the Santa Barbara oil spill, Nelson wanted to capture the energy and attention of the moment to get Americans to care about the environment. Inspired by the antiwar protests held by students and young adults, Nelson focused his energy on college campuses, proposing a day focused on learning about how to protect the environment and taking action.

Nelson worked to drum up support with his fellow Democrats, but he knew he would need help on the other side of the aisle. Luckily, there was an obvious choice: U.S. Rep., Pete McCloskey, R-Calif., who was also an outspoken advocate for environmental programs.

Nelson also partnered with some young activists to help their movement gain traction. Among them was recent Stanford University graduate Denis Hayes, who served as the president of Stanford’s student body and organized several protests against the Vietnam War. Hayes is credited with helping Nelson settle on April 22 as the day for Earth Day, selecting a day in between spring break and final exams.

From there, the network focused on the country’s biggest cities and biggest polluters. Students at virtually every college across the country had planned a rally. In all, an estimated 20 million Americans took part.

The message of the first Earth Day was dire, or at least interpreted that way by most media. On “CBS Evening News,” legendary news anchor Walter Cronkite started his report with the words, “Act or die.” Reporters highlighted there was little violence and that they were prepared for protests similar to the antiwar movement.

Despite the initial coverage and confusion, the Earth Day campaign was considered a success. Millions of Americans across the country were mobilized and voicing their concerns. Environmentalism had become a major political issue. Within months, lawmakers in Washington took action, launching the U.S. Environmental Protection Agency and passing new laws focused on the environment, including the Clean Air Act.

In 1972, Congress passed significant amendments to the Clean Water Act, dedicated toward making every waterway clean enough for safe fish consumption and recreation. By 1973, Congress passed more laws, including some focused on the dangers of insecticides and other poisons. It also passed the Endangered Species Act, credited with protecting hundreds of species from extinction.

In the years that followed, the Earth Day campaign stretched beyond U.S. borders, bringing its message to the world. Organizers played up the 20-year anniversary of the first Earth Day. On April 22, 1990, approximately 200 million people across 141 countries took part in Earth Day activities. Now, Earth Day is considered the largest secular holiday in the world, marked by more than 1 billion people every year across more than 190 countries.